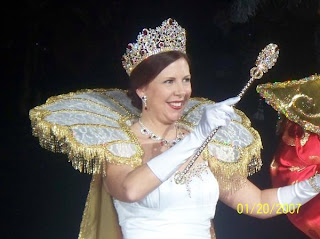 Queen Annette – Inca 2010 – Mardi Gras
Mobile, Alabama
Never in my wildest dreams did I think my daughter would ever be queen of Mardi Gras. However, in all the excitement and anticipation, there was a waiting period of 2 years before the announcement could be made public. In the meantime, all the necessary preparations were on their way. I can assure you that the two years was certainly not enough time to prepare for such an extraordinary event.
The check-list contained:
1) Designing the Crown and Scepter
2) Queen’s Jewelry
3) Designing the dress
4) Designing the collar
5) Designing a 16ft train
6) Shoes
7) Evening dresses for special engagement
Designing the train was the most difficult. Creating the design had to be different than any other design in the past; hence, we featured the crest of the organization that nobody had eve 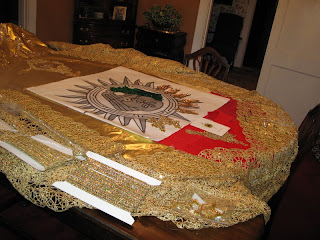 r showcased. We also incorporated her “A” and mine, for our names and two fluttering butterflies representing each of my granddaughters, Brittany and Skyler. The main fabric was red velvet, trimmed in 12” iridescent gold trim, rhinestones sprinkled throughout the train. 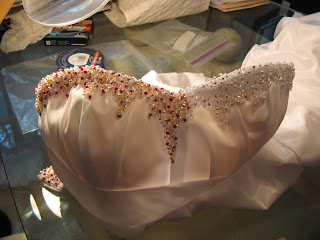 Deciding on the evening gown was another thing. She had her mind set on a certain style but everything that we found was too plain. So mom to the rescue; did all the beading on the dress in Swaroski crystals (Siam AB) with clear crystals and touches of gold beading. Keeping in mind that red was in the train we had to keep the continuity of the color and design. 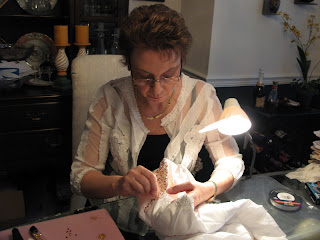 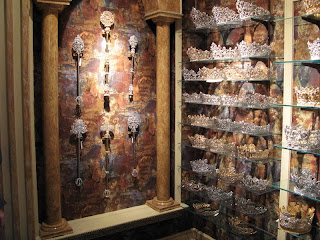 The crown and scepter were custom made by a Mardi Gras crown maker who has been making crowns for Mardi Gras kings and queens for over 50 years. Again we took everything a step further and designed the crown and scepter in Swaroski crystals with Siam AB crystals, a little flamboyant, showy and most pretentious, but why not, she was Queen of the Mardi Gras. A successful coup that had never been demonstrated before in this particular organization. The crown and scepter were personalized with the “A” and special stones were inserted to represent the different family members. Since I was the Queen’s mom my stone was in the center of her scepter. How cool is that?! 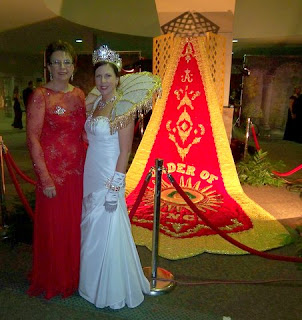 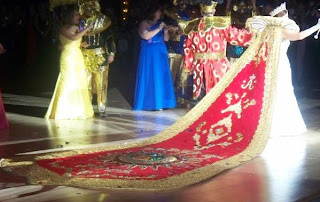 Posted by Adele Sciortino at 4:33 PM

wow!!!! her gown and all are beautiful and look at her proud momma too! all i can say is WOW i kept going back and looking at the gown and cape....wow
sandi

How beautiful the gown. How wonderful an honor for you both.

Just amazing! Congratulations your hard work turned out so beautifully! And what an honour!

Promote Your Page Too